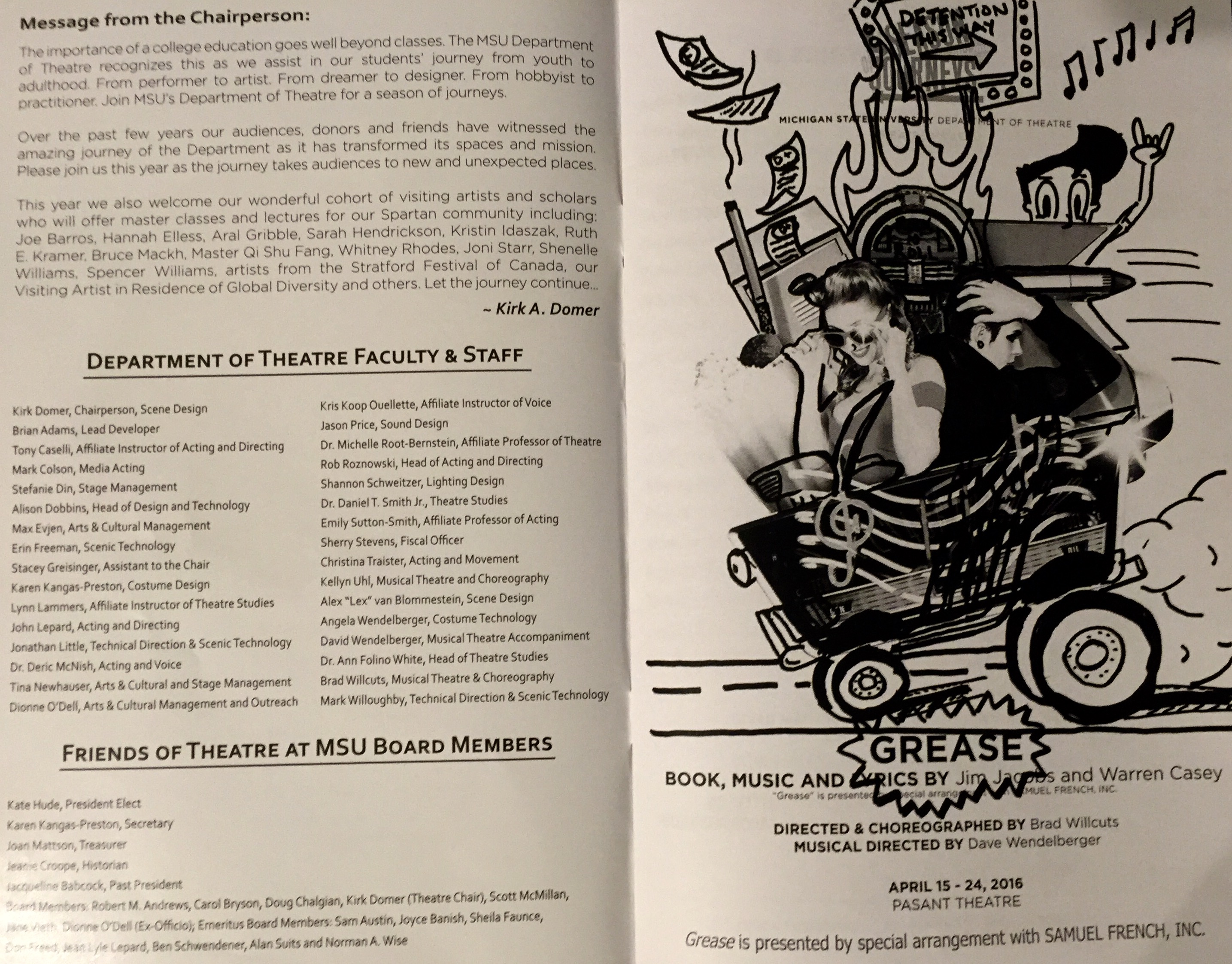 On Saturday, we escaped to the theatre for a matinee and enjoyed MSU’s production of “Grease”. MSU had the rare opportunity to perform the original Broadway version of this musical by authors, Jim Jacobs and Warren Casey and licensing company, Samuel French. It perhaps a raunchier version of the well known and loved movie starring Olivia Newton John and John Travolta.

It’s still features the same plot and classic songs like “Summer Nights” illustrating how Sandy and Danny fall in love over the summer, and then are surprised to see other going to the same high school. He is a classic bad boy wanting to act tough and she is the girl next door with a sweet albeit goody two shoes personality. Despite falling for each other, Sandy & Danny have to overcome obstacles and peer pressure from keeping them apart. It also tells the story of their group of friends: Frenchie, who drops out of high school to attend beauty school finding it does not work out as she planned; Rizzo who acts callous always giving Sandy a hard time but is really terrified when faced with a pregnancy scare and Kenickie who is restoring the car he bought known as “Greased Lightning”. The group of teenagers are rebellious, fight conformity and face the social and sexual revolutions of the time in 1959.

The original version features intense language, embraces sexuality, and recognizes the angst of being a teenager while being a little less family friendly than the later production. There are also some music surprises such as no version of “Hopelessly Devoted To You” and “Alone at a Drive-In Movie” replacing “Sandy”. The biggest surprise and disappointment for me was the song “All Choked Up” instead of “You’re The One That I Want”. It is not that the song was not musically interesting or the dancing entertaining however it just did not feel like the same climactic moment that “You’re The One I Want” delivers.

The MSU student ensemble works well together with tough choreography, an elaborate set including a balcony, beautiful costumes and wonderful acting. “Grease” is entertaining, fast paced and enjoyable.

The show was located at Wharton Center’s Pasant Theatre in East Lansing. This is a smaller theatre with seats right next to the stage so it provides an intimate experience.  Our seats were to the right of center stage and I was unsure of the viewpoint when making reservations (based on the online diagram) however I was pleasantly surprised. I don’t think there is really a bad seat in this theatre. The tickets were $22.00 with and additional $6.50 in service fees for a total of $28.50 each. We were able to park in the attached parking ramp for only $5.00. The prices were quite reasonable and the experience very entertaining. I look forward to checking out more shows at the Wharton Center.