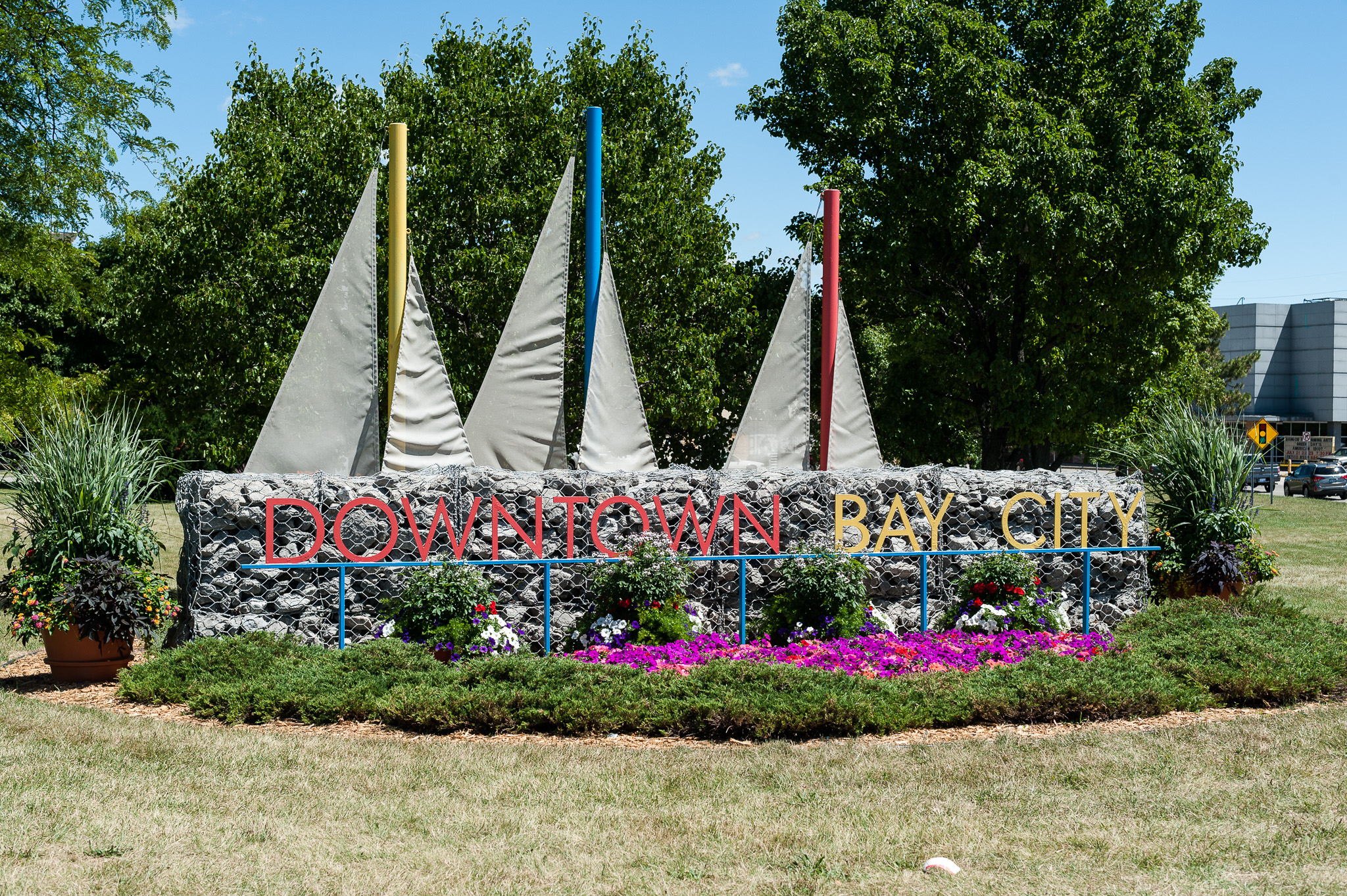 We adventured to Bay City, the town where I was born, this past Saturday to see the Tall Ship Celebration. This four day event only occurs every three years (or longer) and is quite a sight to see.

Bay City is a host port for a series of races called the Tall Ships Challenge organized by Tall Ships America.  This is Bay City’s fifteenth year hosting the maritime festival and fleet which encompasses each time it has visited the Great Lakes (2001, 2003, 2006, 2010, 2013 & now 2016). It is also interesting to note that Bay City is recognized as the  designation “Port of the Year” by Tall Ships America on more occasions than any other community in North America.

We arrived around noon and were happy to see the event offered free parking. There were limited spots available upon arrival though and we were lucky to actually obtain a space. There was a free shuttle service advertised to take you to the river, however we did not see the shuttle in the area so we decided to walk over instead.

The lines were quite long for entry and we were happy to have chosen the gate under the bridge so there was shade protecting us from the heat. It was only 70 degrees outside but with the sun and crowds–it was quite warm. Upon check in, the sales volunteers informed us boarding the ships was a minimum two hour wait time and verified we still wish to purchase the pass. We were hoping the crowds might ease and decided to still buy the passport ticket. Unfortunately, they had run out of the fun looking souvenir passports and we received a paper brochure as our passport. The cost was reduced to only $5.oo per person for this which was a plus. You may also purchase tickets in advance of the event for discounted rates.

When entering, a quick bag search was completed by security and then a wrist band should be given. At the initial gate, there did not seem to be anyone passing out the wrist bands so we thought they had run out of these too. The crowds were intense and this event seems to be as busy as The National Cherry Festival. The lines to tour the boats were rather disorganized and hard to distinguish start and end. We decided to walk the pier and just view the boats initially.

The event hosts twelve ships total. Two ships were available for a sail excursion, Bay City’s own tall ships, Appledore IV and V, with additional advance ticket purchase. The other ten are split (six and four) dockside located on both sides of the Saginaw river.

When and If is an 83 foot Alden schooner which was commissioned by General George S. Patton in 1939. Her name is attributed to the quote, “When the war is over, and if I live through it, [my wife] Bea and I are going to sail her around the world.” The Canadian Mist of Avalon is a Gaff Schooner. In 1967, this ship began her life as the Motor Vessel “Liverpool Bay”. After twenty years of hard work transporting fish, this vessel was abandoned at a Halifax pier. It would take another five years of neglect before this ship would be restored and return to sea. One of the most visually interesting ships was The Galeón Andalucía. This ship is a replica of a 16th-17th century galleon and the only one in the world that sails in present days. This was the type of vessel used by the Spanish Crown and these ships established trade routes between Spain, America and the Philippines islands carrying seamen, merchant traders and settlers along with loads from American and Asian trade. Three years of historical and maritime research were required to document information about size, shape and assorted details so a replica could be built. As the tours were so crowded, we decided to cross the river and view the ships on the other side. Traffic was quite heavy across the bridge and navigating the best path was not always clear or easy. I would recommend using the shuttle after our walking experience and will do this when we visit this event in the future.

Upon arrival on the other side, we were asked to show our wrist bands. We explained how the gate at the other side had not given us any and showed our paper passports. Luckily, we were allowed to enter and were now given the appropriate wrist bands.

I enjoyed seeing one of the State of Michigan’s official tall ships, the MHA’s schooner Madeline. This is a reconstruction of a mid-19th century Great Lakes schooner and was built between 1985 and 1990 in Traverse City by volunteer members of the non-profit group, the Maritime Heritage Alliance.  Garrin’s grandfather was a volunteer working on this boat back then and Garrin actually watched the fourth of July fireworks aboard this boat years ago. I was really hoping to tour this ship at this event, however the crowds continued to make this a daunting task. I have learned that the Madeline is open to visitors in her home port of Traverse City so hopefully this will be a future endeavor. Another visually inspiring ship is the Viking Longship, Draken Harald Hårfagre. The vikings left minimal records about their vessels. Many have attempted to recreate Viking ships, with some replicas of the ships archaeologically found and some inspired from the norse sagas. Draken Harald Hårfagre inspiration came from the Gokstad ship mentioned in the sagas and from knowledge of traditional boat building. This ship has almost a dragon shape which I loved. I learned that this ship is attempting to raise funds to afford the pilotage fees necessary to continue the expedition in the Great Lakes. Unfortunately, it appears unlikely the project will obtain the funding needed to continue, however I am happy the crew went through with the Tall Ships Celebration in Bay City and I had a chance to view this beauty. I am regretful that we did not wait in line to tour this ship.

The Tall Ship Celebration offered food vendors and refreshments. I enjoyed a freshly squeezed lemonade but found the crowds too daunting to wait for food. Additionally, there were various artists performing maritime music to enjoy and vendors selling souvenir merchandise. I would have been likely to take something home as a keepsake if crowds had not been an issue. There were narrated boat cruises on the river which looked like a fun way to beat the crowds and view the ships. An Arts Fair with nautical creations took place at Veteran’s Memorial Park though we did not have the chance to locate it.

In general, I wish the event had offered signs and maps to better navigate the area and lines. If you attend a future year’s Tall Ship Celebration, I recommend arriving early on a weekday to have the best chance to actually tour the ships. Don’t forget sunscreen and a hat as well. I know I will plan as recommended above for next time!