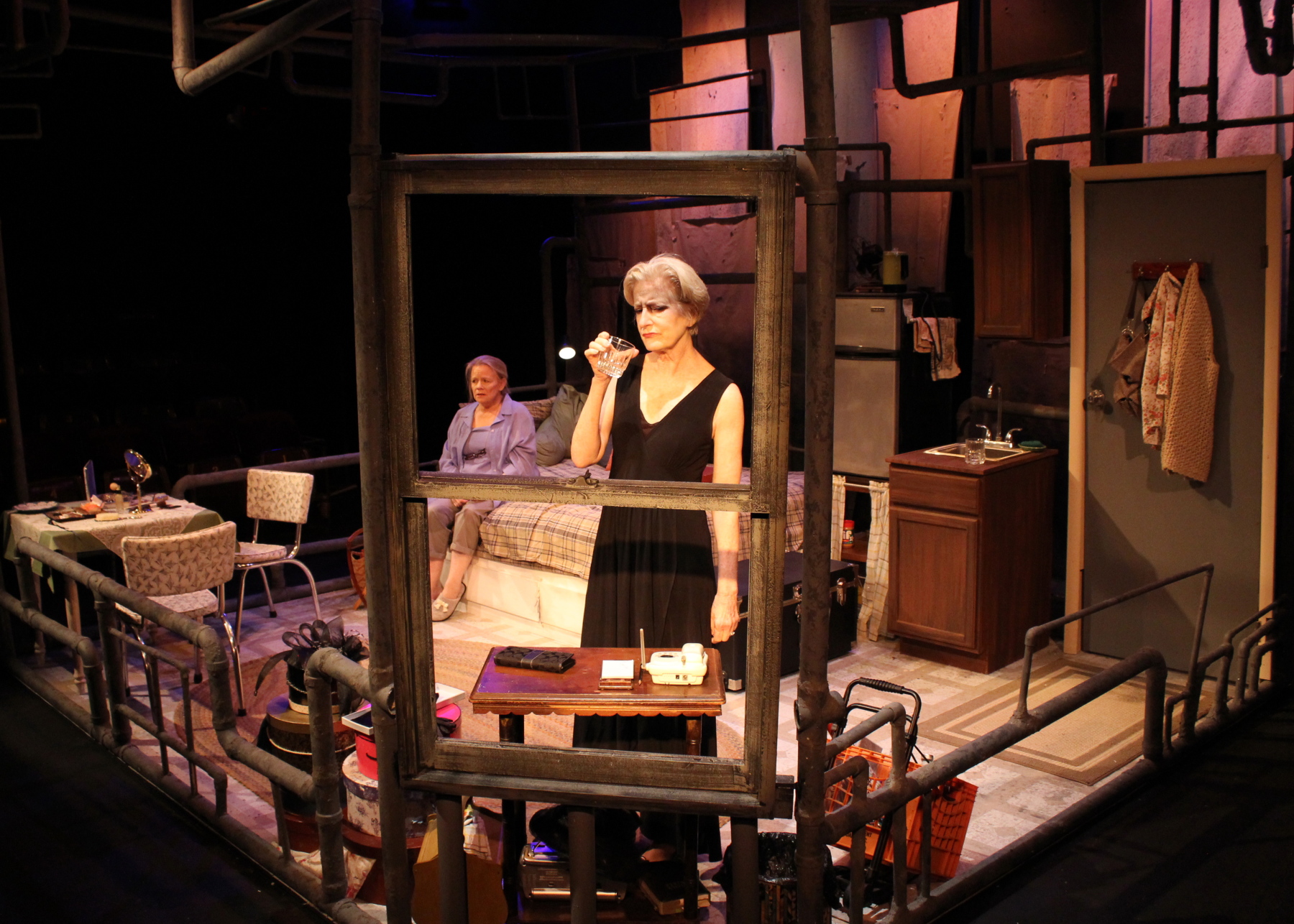 Williamston Theatre’s Opening Night production of A Painted Window takes the audience on a journey about life, relationships and the importance of love. The story is exquisitely heartfelt albeit painful tale of family; how one navigates the different directions in life with loss and regret while emerging a survivor.

American playwright Christy Hall has penned a script full of realism delivering a drama full of witty dialogue with just enough humor and warmth to help the audience through the turmoil. It showcases a story that features the reunion of two sisters, Josephine and Sylvia, who used to giggle together late at night, yet now stand worlds apart. Forced to move in together after decades of estrangement, the two women struggle to reconcile their past, navigate the present and plan their future. A Painted Window is also a keen dissection of identity, classism, racism, and the havoc that consumerism, greed, and entitlement have wreaked on the American Dream. It demonstrates how wealth, material objects, fear and the inability to change can isolate a person destroying dreams instead of fulfilling them. This play is ultimately, at its core, about love and the rare unconditional love we rarely experience or fully understand.

Hall has resided in Harlem for the last eight and half years and this play started as a tribute to this community about six years ago. Hall actively works on a large catalogue of plays and musicals with focus on this play during the last year. A Painted Window was chosen as one of six plays to obtain a workshop production at HP Studio in NYC. Hall shares her inspiration, “Harlem is this incredible community that has a lot of history. A lot of people when I first moved were concerned that is where I landed. I found that to be so odd as my experience was completely different. There is a very interesting explosion of ideas of what Harlem is. And Harlem has many faces—it is just an incredible neighborhood. It first began as my love letter to Harlem. It started to evolve into something bigger. To write a play is truly to ask questions and to wonder about things. I started wondering about the state of the economy and I truly believe the American dream has been hijacked. This obsession to be wealthy and have status really isolates us from other people. We sacrifice relationships very readily in exchange for material and money and ultimately those things truly do nothing for us but isolate else from the rest of humanity.” Hall turned these thoughts into a story that is simply about love, the rejection, seeking and understanding the different stages of love. Hall’s script shows that there are relationships and people that give love unconditionally, the purest form of love, without expecting anything in return. Frannie Shepherd-Bates directs the story. Shepherd-Bates is excited to produce Hall’s emotional challenging play in this World Premiere and enjoys working with cast and crew.  Shepherd-Bates discusses the casting process and ease of how it all came together. Shepherd-Bates instantly had people come to mind when reading the play and the pieces just fell into place during the audition process. A Painted Window cast features Ruth Crawford as Josephine (Jacob Marley’s Christmas Carol, Miracle on South Division Street and Old Love), Dominique Lowell as Sylvia (Outside Mullingar), and Lynch Travis as Charles (Williamston Theatre debut).

The enthusiasm is contagious when the group discusses the comradery and teamwork involved while making this production. Everyone collaborated so the production would become the best it could be. The actors felt they had equal voice in the outcome which can be unusual. Hall is very grateful for everyone’s involvement and willingness to work thorough changes together like the twenty new pages of the ending rewritten on day two or three of rehearsal. Hall shares, “A huge part of a World Premiere is to be very active in the process. A play is meant to be heard and performed. I truly don’t know quite what I have until I see it on its feet. It’s a huge thing to ask of everyone when it is a new work. You are asking everyone to be really brave, extremely humble and to work very hard and to go on the journey with you. And everyone in this room has done that and I am very grateful for that.” Shepherd Bates concludes, “Most rewarding is how collaborative this production has been. Christy has been very open to identifying what has worked really well and what could work better. She has been open to hearing that from all of us. And then diving in and us seeing on our end what could we do to grow this moment and her saying what could I do to help you grow that moment.”

The director and cast are animated about the story and share their first reactions to the script. Lowell states, “I was excited that were well rounded characters written for older women—it’s hard to find. Crawford expands, “I thought the characters are really, really challenging works. A lot of balls in the air at the same time. And the relationships are rather unique and the play is divided into two parts and my relationship between the two of them is in completely different places. The structure of the play is unique. I think it will be fun to watch that and see this ping pong thing going back and forth. Travis adds, I really relate to Charles, what happens in his relationship and I thought it was very honest, unique and tough for a playwright to go there.” Shepherd-Bates concludes, “I was excited about how unusual it is. I like new plays and I was excited to dig in and see where it was going to go from where I first read it.” When discussing the production and the characters, one instantly realizes that the entire cast is working hard and enjoys starring in this show. Lowell shares, “I’m having fun with a lot of different parts of it. It is always challenging working on new stuff and you have to have a lot of blind faith that it is going to work. I am the only one on stage that does a thick New York accent so that has been a lot fun.” Crawford adds, “My favorite thing about the character is that she seems to have gone in a direction away from what she was as a child and yet she carries her childhood with her in some of the best ways and some of the most painful ways.” Travis says’ “I like Charles because he is a likeable guy and I also can identify with a lot of things he has gone through in his life. On the surface he might appear to be a real simple guy but there is complexity to him.”

Williamston Theatre always delivers a well-designed set that transports the audience and brings the stage to life. This production features an unusual set with a very small cramped New York apartment. The set and the movement limitations help the cast feel confined and trapped which aids to the story of the play in many ways. The window is also key to the set and story. Shepherd-Bates summarizes, “It is sort of an abstract set. It’s a cage and it’s confined by pipes but yet you know exactly what it is—this is a tiny shabby studio apartment. That is a credit to the stage designer that she is able to walk this line between something that is very abstract and artistic and something that is realistic enough for us to tell our story.”

Hall summarizes her experience with this production and Williamston Theatre, “This theatre has been so generous with me. Every person involved that I have come in contact with has just been incredible. This theatre gives me a lot of hope that you can have such incredible offerings of live theatre in small communities. I am really proud that the Williamston Theatre is doing really good work but they are also championing new plays. That is invaluable for someone like me. A big thank you.”

Audiences will enjoy being transported back in history and will instantly relate to the New York set, characters and the relationships that unfold. This is a drama however it is laced with humor and fast paced dialogue so the audience will not feel like the story is standing still at any time. The characters all struggle, face challenges and tough circumstances and survive. The relationships show pure love; unexpected, painful, heartbreaking and still beautiful. Don’t miss checking out the show by ordering your tickets here.