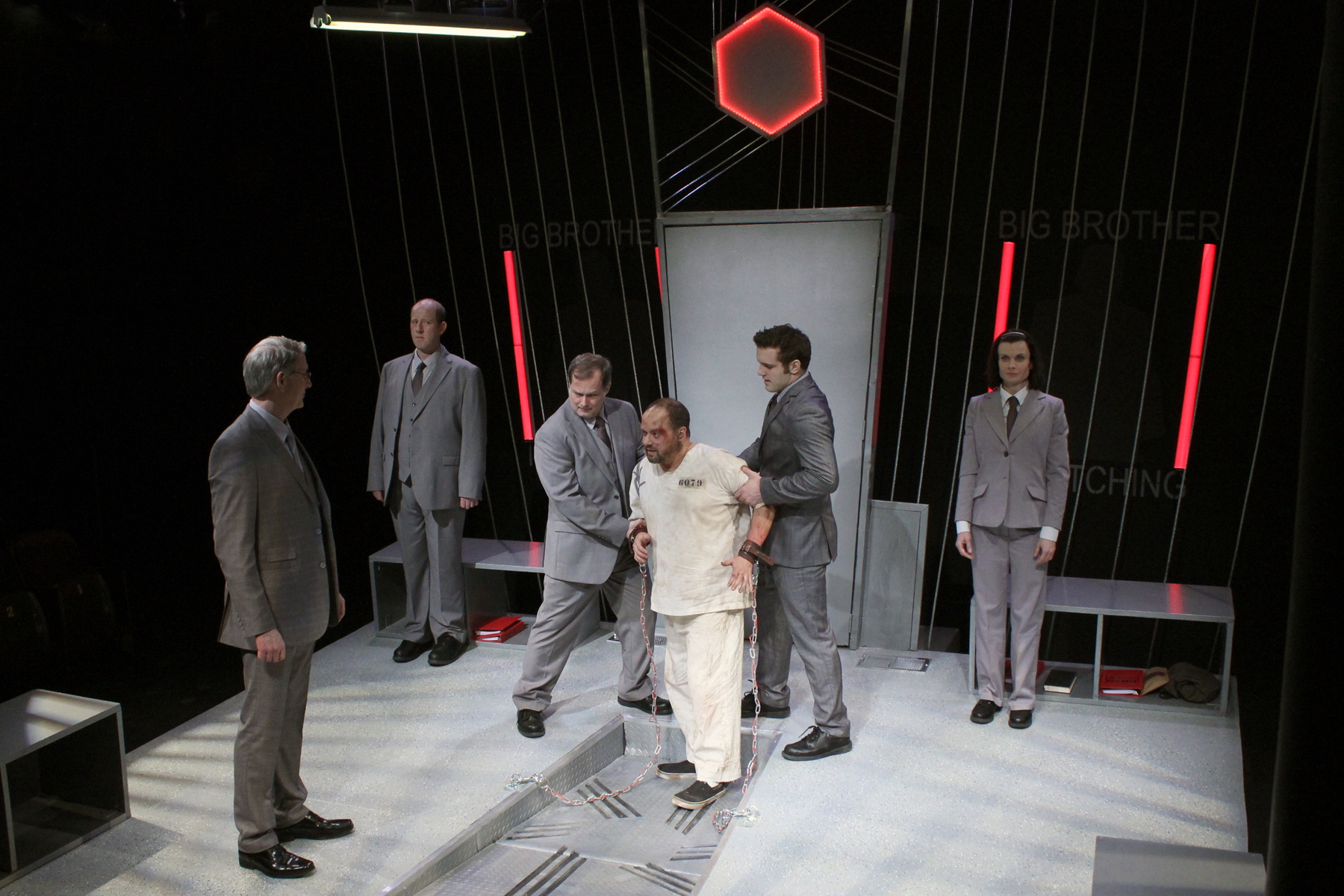 Williamston Theatre’s Opening Night production of 1984 takes the audience on a journey that rings true to the times we live in and today’s current political climate. The adaptation of George Orwell’s classic novel was penned by Michael Gene Sullivan, a playwright originally from Livonia, Michigan. 1984 recently returned to the Best Sellers List and it is like Williamston Theatre forecasted this event when planning this year’s season—the timing is perfect.

Sullivan expands the tale in an interesting way that is fast paced and captivating from the start. 1984 brings us the story of Winston Smith, a cog in the giant machine state of Oceania. Sullivan’s imaginative adaptation of the novel skips over the first parts of the novel focusing on Winston Smith after his arrest by Big Brother’s agents and his isolation in the torture chamber. Winston has been caught struggling for scraps of love and freedom in a world awash with distrust and violence. With the brutal “help” of four Party Members, Winston is forced to confess his Thoughtcrimes before an unseen inquisitor, and the audience – which acts as a silent witness to his torture. Winston’s increasing rebellion against the regime and his furtive love affair with the mysterious Julia is explored in snippets. A ferocious and provocative adaptation of one of the most prescient works of literature of the last century, 1984 asks: “What does it mean to be an individual? What does it mean to be human?” Sullivan infuses the work with intelligent dialogue, fascinating characters and modern political rhetoric. The play is multi-layered, intense, riveting, and frightening, all at once, and the core emotions of the story ring more accurate today than in 1949.

Williamston Theatre’s Artistic Director, Tony Caselli directs the show. Caselli is excited to produce Sullivan’s provocative play in this Michigan Premiere and enjoys working with cast and crew. Caselli discusses the casting process and how the pieces fell into place. Caselli shares, “I have been really pleased with the performances, the ensemble and the process. I love working with people who like working and don’t act like their doing us a favor by being here because that makes a giant difference to everybody in the process. That part has been really great.” 1984 cast features Tobin Hissong (Rounding Third), Curran Jacobs (WT Debut), John Lepard (Pulp), Robin Lewis-Bedz (The Art of Murder), Brandy Joe Plambeck (WT Debut), David Wolber (WT Debut).

The director and cast are animated about the story and their first reactions to the script. Caselli summarizes, “I love the story and what I like about this this adaptation is that it is very theatrical. It lets four people do most of the story telling but still gives us a really solid version of Orwell’s novel but it also adds the element of these four party members who aren’t in the novel who help us tell Winston’s story. Also the play is about their journey as well which is really fun. So it is about more than Winston’s story—it is about some of the people around him.”

When discussing the production and the characters, the cast’s enthusiasm is contagious. Brandy Jo Plambeck shares, “I think it has been really fun, we’ve been able to build layers unto it since the party members aren’t in the book and within the story itself, we don’t know much about them. We’ve been able to create that ourselves and that is not something you always get to do. Lots of times the characters and stories are flushed out.” Tobin Hissong adds, “Most of us are playing multiple characters. It does stretch me to create four or five distinct people on stage.” Curran Jacobs says, “Taping into the evil of this human being has been interesting. Human beings can be wicked and this character in particular is despicable so it has been fun playing with his emotions and his hatred toward Winston Smith.” Caselli shares that is has been super rewarding directing this play and summarizes, “The production staff and design team have been great to work with on this. Because of the challenging political environment and how it is so divided in our country right now, everybody has come to work very energized about the project so there is that part of it I’ve really liked. But for me, I’ve wanted to put this play on for years because I think it is such an amazing, rich, important piece of literature and getting the chance to do that I am really grateful for.”

Williamston Theatre is known for delivering outstanding sets that bring the production to life despite the smaller stage. This production features an unusual set with a rake stage—where the actors perform on an angled surface. Plambeck summarizes, “This is a really cool experience. It makes the world feel a little off-kilter—things are weird here. And I like that a lot.” The story takes place during Winston’s interrogation and the set bring challenges and an interesting experience for actor David Wolber. Wolber shares, “I am chained up for the entire thing. It affects how I do everything since I am chained to the floor the whole show.”

Williamston Theatre also has an exciting collaboration with MSU for this production in every aspect of the show. Along with the theatre artwork, the MSU Department of Literature is showcasing a group of student’s installation about the novel and George Orwell in the back lobby that is also fun to see.

Audiences will enjoy being transported back to the time of Orwell’s novel with the set of new characters and the relationships that unfold. Hissong shares’ “I think people will get caught up in this very quickly and it will be over before they know it and they will walk out of the theatre saying ‘what the hell did we just see?’”. Robin Lewis Bedz reminds us “This is a cautionary tale and how technology can be used for good or evil”. It will remind audiences of the age we live in.

John Lepard summarizes, “For those who know the story, they are going to enjoy the adaptation. They are going to walk in and say how are they going to do this? How do you put 1984 on stage? And then we do and they go—oh that is how you do it.” This is an intense drama, however it is truly about if you live in a world without love and empathy and what that does to people. It is an experience that stays with you long after the curtain closes. Don’t miss checking out the show by ordering your tickets here.