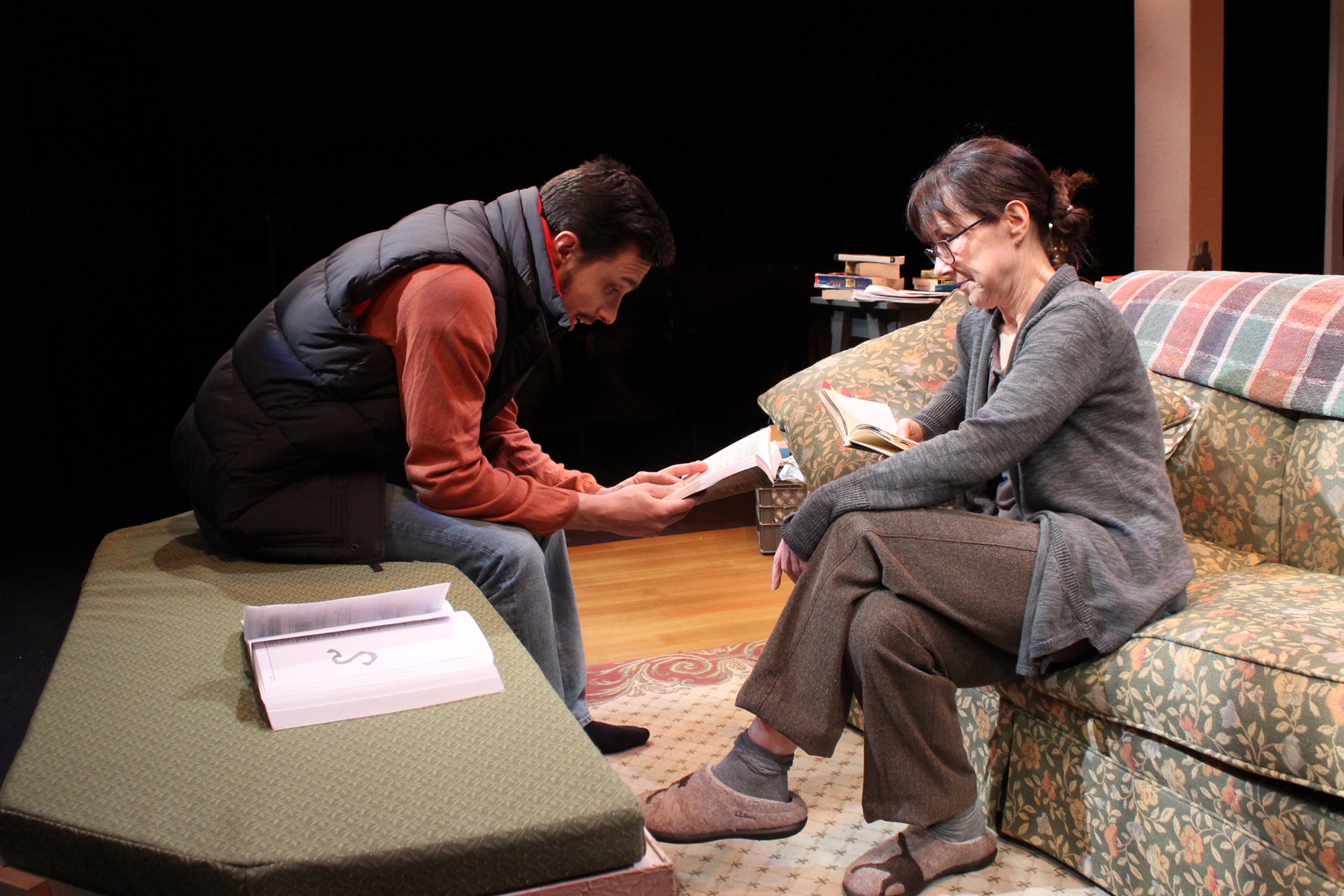 Williamston Theatre’s Opening Night production of Taking Shakespeare showcases the power of storytelling with a comedic flare and witty indictment of academia. John Murrell’s script is a modest but charming play laced with barbs, amusing banter, delightful characters and familiar life moments. It’s also a delightful way for audience members who haven’t experienced Shakespeare or never connected with Shakespeare previously to develop that connection with relatable characters and life experiences.

When longtime college professor is asked to tutor her dean’s son through his freshman Shakespeare class, she finds it to be as much a test for her as it is for him. The Prof. has been tasked with helping Murph who is far more interested in video games than either Shakespeare or school. Murph admits his only reason for seeking the professor’s help is at his mother’s insistence. Murph tells the Prof., “I’m taking Shakespeare,” during their first meeting in the shabby apartment that is her home.  “But I can’t get into it,” he continues.  “I don’t connect.” The Prof. tries to change that by embarking with Murph on a journey through Othello and although they seem to have nothing in common, as they explore the Bard’s Othello together, they learn more about each other—and themselves—than either is ready to admit. While they draw strength from the play, they come to understand what it means to live up to expectations. The story reminds us that literature enables both the old and young to transcend their differences and find common ground.

Mary Job directs the show and is excited to produce Murrell’s play in this Michigan Premiere at Williamston Theatre. Job truly enjoys working with cast and crew. Job discusses the casting process and the numerous choices made. The experience created an interesting internal dialogue of what each actor could bring to the role and who was best suited to pair together. Taking Shakespeare cast features Terry Heck (Sirens) and Michael Lopetrone (WT Debut).

Job enthuses, “It has been a pleasure to work with actors as experienced as Terry and Michael are because normally I am working with students or community members who are very talented but not honed the instincts that Michael and Terry bring to a rehearsal process. It has been very freeing.” The director and cast are animated about the story and their first reactions to the script. Job and Heck are teachers with experience educating students on Shakespeare as an acting style and both instantly connected with the script. Job summarizes, “It seemed like really familiar territory as a teacher and I found it really intriguing as someone who also teaches Shakespeare as an acting style. It was really kind of fun to read and particularly Othello which I don’t tend to use a lot as an acting tool so kind of fun to get reacquainted with that.” Lopetrone adds another perspective, “I remember when I finished reading the play for the first time and that there is so much left unsaid. The playwright gave you clues to these people but then he did not resolve it which is exciting as an actor as you get to fill in the blanks.”

When discussing the production and the characters, the cast’s enthusiasm is contagious. Heck and Lopetrone share a camaraderie illustrated on the stage with their timing and teamwork featuring a rhythm all its own. Lopetrone enjoys that his character feels familiar and relatable like a friend of yours. Heck shares, “I really love the language of it that interweaves between the Shakespeare and the characters is quite wonderful. I love the complexity of my character and both characters are ‘on the ropes’ and sometimes we feel like ‘on the ropes without a net” but the other one saves us when we need it.” Job adds, “It is very rhythmic and it has a lot of nuance to it that is unstated. There are so many shades of meaning that he can pack into one sentence.”

Job shares that is has been very rewarding directing this play and summarizes, “As I previously said, there has been working with Terry and Michael. Also it has been fun to figure out as we’ve gone along and I’ve prepared, the correlation between these characters and Othello. It has been fascinating as a theatre teacher. This play is very much watching catharsis on stage. These two people encounter this play and they are changed by it. By digging into the characters of Othello and what makes the characters of Othello tick and how that affects them. It has been a really interesting process.”

Williamston Theatre delivers another realistic set that brings the production to life despite the small footprint. This production features the professor’s apartment with a couch center stage. The actors faced the challenge of how to maneuver around this piece and still produce interesting angles and visuals to the audience. A fun prop in this play is the coffee maker which produces actual coffee during the show. The stage becomes filled with an enticing and inviting aroma that instantly makes you feel at home.

Audiences will enjoy being transported to the time of Shakespeare through the character’s experience with Othello. It is easy to develop an undeniable connection with both Shakespeare’s characters and the familiar characters of Prof. and Murph while becoming immersed in the performance. You will fall in love with the characters, their struggle and the journey. The show delivers laughter, fun and an experience that you will remember through the art of wonderful storytelling. Job succinctly summarizes, “I think this play is about the power of words. These characters really become part of you.” Don’t miss checking out the show by ordering your tickets here.