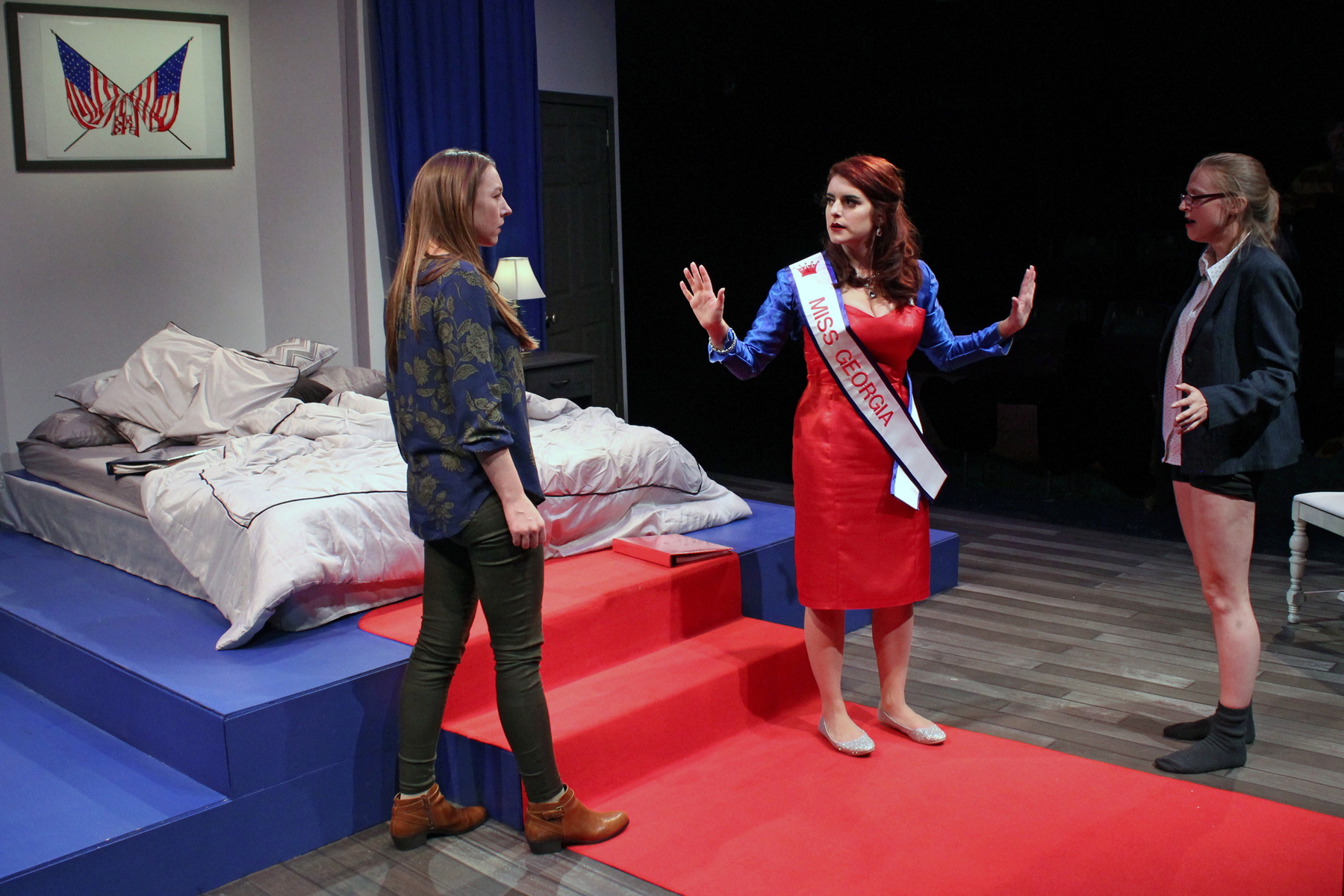 Williamston Theatre’s Opening Night production of The Taming kicks off the twelfth season with a laugh so hard your sides hurt comedy. The show is one of a kind with a thought provoking look at democracy in action and so many hysterical lines you hardly stop laughing before the next one is delivered. The audience will love that The Taming consistently illustrates fast moving comedic pacing while exploring different points of view in America’s political arena.

Inspired by Shakespeare’s The Taming of the Shrew, Lauren Gunderson’s play is set at a Miss America pageant where a very sparkly beauty queen named Katherine, a liberal political activist blogger and a republican senatorial aide are trapped in a hotel room together. Katherine wants to jump-start a movement to rewrite the Constitution and the political passions of these women explode in a revolutionary, comedic and cathartic set of moments that you can’t help but relate to in this political farce.

Lynn Lammers directs the show and is excited to be back at the Williamston Theatre. The Taming cast features Alysia Kolascz as Bianca (Pulp, The Gravedigger & Ebenezer), Angela Dawe as Patricia, (WT Debut) and Melissa Mercieca as Katherine (WT Debut).

Kolascz & Mercieca performed a reading of this play earlier this year at Williamston Theatre on Inauguration Day. Lammers enjoyed this performance and knew these actors fit the roles. Lammers discusses the casting process and how she instantly thought of Dawe’s comedic talent and background that resulted in asking her to read. Lammers directed all three actors read in different combinations during the audition process. Kolascz, Dawe and Mercieca simply stood out as fitting together best and were easily cast in the roles. The cast compliments each other during the show and delivers stellar performances. Lammers shares that directing this production is very rewarding as this is a straightforward comedy with high energy and fun. She has enjoyed the opportunity to be at Williamston Theatre and collaborating with Tony Caselli (Williamston Theatre Artistic Director) as this type of comedy with a precise execution of jokes is his forte. Lammers comments, “Everybody is up & running right away. Zero to sixty in the first production meeting. First rehearsal everybody gets it. These actors understand comedy right here. They understand the pace and rhythm and the structure of a joke and how to execute it.” The director and cast are enthused about the story and their first reactions to the script. Lammers shares, “It is really funny and considering that it is a political play—it is funny for everyone. Nobody is left out and it is a pretty light-hearted skewering that is equal on both sides.” Mercieca adds, “It is very well thought out. The way that she designed it to present this idea to America is done in a very factual actual way. She does not make fun of anyone specifically—she makes fun of everybody and the political information used from history is accurate when it is suppose to be. She presents a very smart idea about our country.” Kolascz summarizes, “For each character, there are some great lines that are very smart and very accurate and really nail you. But there is nothing preachy about it and the premise of it is absurd in nature and crazy where the ideas in it and the dialogue are really smart and funny. It is a cool mix of things.” Dawe concludes, “I remember thinking how did I read this play that is very light and does not make any huge moral statement and it still managed to make me think about things in a way I hadn’t before politically. That is some very skillful writing.”

When discussing the production and the characters, the collaboration, fun and enthusiasm is infectious with this team. Lammers shares her favorite thing about this production, “We have a really strong cast and team of designers. We have a lot of people that have never worked with each other before and gotten quickly in tune with one another. They are able to be on the same page and really move. They have been able to make some cool decisions and cool choices that is going to make the end product really effective.” When speaking with the cast, it is easy to see a shared vision for the production and the joy of bringing it to life. The cast expresses how collaborative the process is along with a playfulness and relationships built at the rehearsals. Mercieca’s comments summarize the comradery, “I love laughing. I think laughing is the best medicine. And we laugh the whole rehearsal and internally laugh the whole show. It is probably one most fun shows that I’ve done personally.”

Williamston Theatre delivers a fun set that highlights America, a pageant show and truly brings the production to life. The set takes the audience to different times and places within a fast pace during the show.

Audiences will enjoy the non-stop entertainment this show delivers leaving you energized and proud to be an American. It is full of hysteria, laughter, antics and political zingers that make you stop and think. You will truly appreciate the different political views by finding the humor in both sides. The production is fast paced, full of energy and takes a very playful approach to issues that are important to this country. Lammers summarizes, “Beyond the comedy, there are several wow moments. Just surprising moments in the play that I think people are going to find delightful. Come and laugh with a room of people that may have very different political beliefs than you. The laughter and joy of having fun together in a room in real life can only be helpful.”

Don’t miss checking out the show by ordering your tickets here .