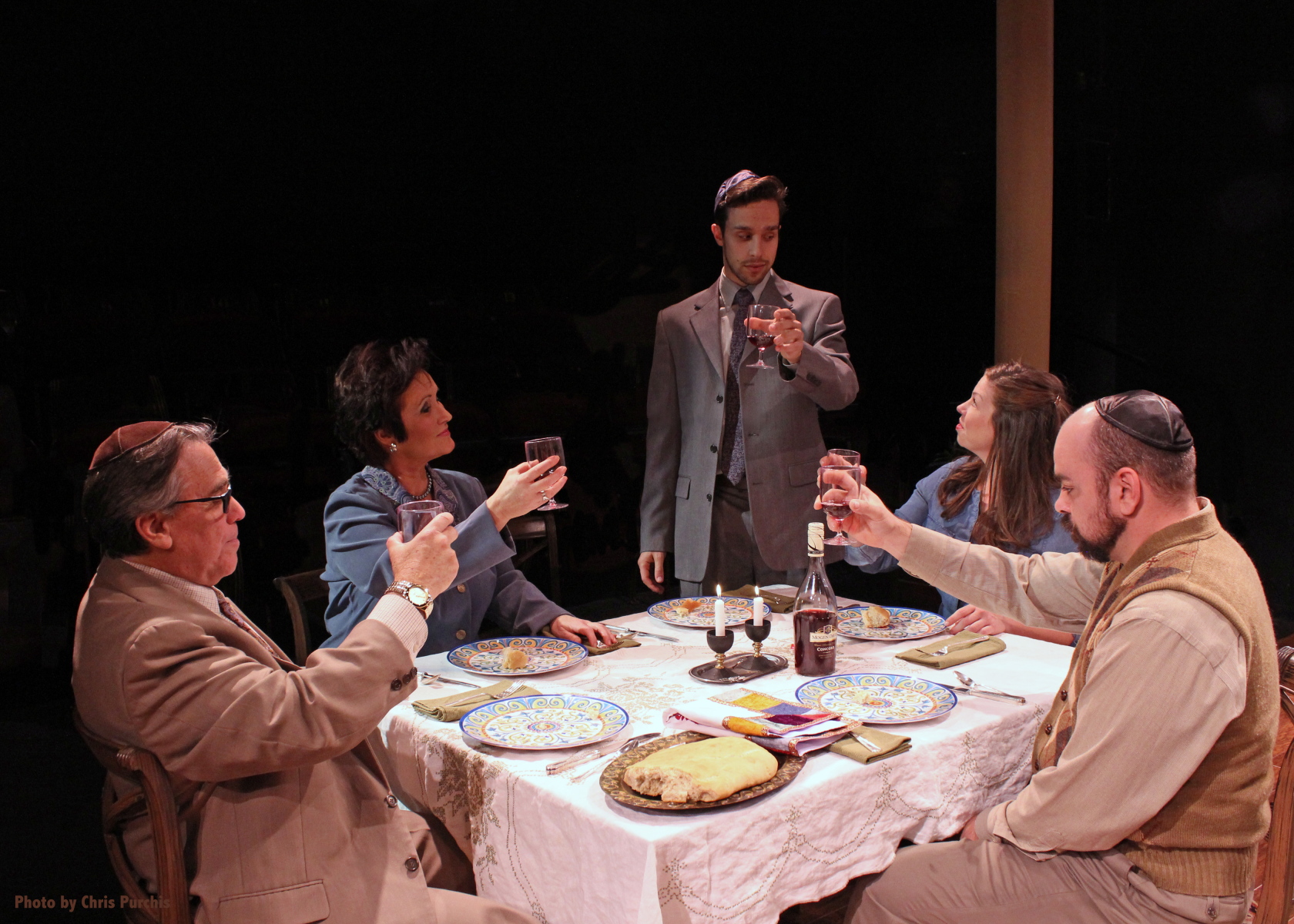 Williamston Theatre’s Opening Night production of Beau Jest is the perfect feel good romantic comedy for the Holidays. Audiences will embrace being invited for dinner and truly feel part of the family on stage when watching this show. It is impossible not to fall in love with the characters, the sense of family and tribe in this delightful comic romp.

The script, by James Sherman, is a brilliant written piece of art. The play delivers a genius satire of Jewish family dynamics while continuously showing a simple message about the importance of kinship. Sarah is a nice Jewish girl with a problem: her parents want her married to a nice Jewish boy. They have never met her boyfriend, a WASP executive named Chris Kringle. She tells them she is dating a Jewish doctor and they insist on meeting him. She plans a dinner party and, over the heated protests of Chris, employs an escort service to send her a Jewish date to be Dr. Steinberg. Instead, they send Bob Schroeder, an aspiring actor who agrees to perform the impersonation. Hilarity ensues in this charming family comedy with a tender heart. Caselli states how the casting process expanded limited auditions and the only real surprise involved recasting the role of Chris a couple weeks prior to rehearsal. Caselli shares, “Everyone fits the play, fits the character but also has been great to work with. Any chance you have to work with a team of people who devote to the process and the piece is a joy.”

The director and cast are truly excited about the story and their first reactions to the script. Sawson begins, “I thought it was funny. It reminded me of a great episode of a TV show that I loved. It felt like you could fall in love with the people in it–they felt familiar.” Buchalter adds, “The thing that struck me most about it–was the familial aspect of it. The strong sense of family in the show and the importance of family. I love that aspect of it.” Loos shares, “When your first read it, it reads like it could be that Neil Simon-y ‘set them up, knock them down’ but it was clear from the very beginning that no one was taking it that ‘hammy straight from a joke’ direction and were playing it like real people so it has grown on me a lot.” Caselli summarizes, “It is funny and sweet and I like that despite the goofiness of it—there is a really nice heart there.” Caselli is happy to feature a script that brings people together during the Holiday time of year within the Williamston Theatre’s season. Caselli is also excited to share an important message the play offers, “This play is about accepting people who are not from your tribe. Moving forward with your life but accepting that we can co-exist and work together.” When discussing the production and the characters, the camaraderie, fun and enthusiasm is simply infectious with this team. The entire cast appears thrilled to be working together and shares how rehearsals and performances are a pleasure. Birch raves about how fortunate the cast is and how performing together “is the most fun I have had in a long time.” A sweet fact shared by Buchalter is that he has known Sawson since she was a little girl and how it allowed him to embrace the family and father aspect to an additional level due to the special relationship shared with his cast-mate. Birch shares her joy working with Caselli again and how his direction has kept them grounded and learning more with each rehearsal. The sentiment is quickly echoed throughout the team. The group also expresses gratitude for Caselli arranging Frannie Shepherd- Bates to consult helping the cast understand and embrace the Jewish religion ensuring prayers and traditions are authentic on stage. The team feels connected with the religion in the play as a result of how much learned through the rehearsal process.

Lopetrone shares his favorite thing about the show, “The sense of tribe that Tony talked about it really stuck out to me. It feels like that in the rehearsal room. It feels like that on the stage. It feels like that when talking to people after the previews we’ve done. That sense of family and what it means to find your group of people. This cast feels very much like a family and that comes across on stage I think.” Loos adds, “Even though it is told through the lense of a Jewish family, how universal these themes and lessons are to my family who is not overly religious. That is something I really enjoy.” Caselli concludes, “It is simple looking at it, it is a story of a woman who tries to fool her family and gets caught. And it is a romance. But I love plays that use comedy as a vehicle and make people go away thinking and feeling good but also wanting to be with the people they love and maybe even expanding that circle.” Williamston Theatre showcases a realistic set illustrating Sarah Goldman’s home uniquely performed ‘in the round’ which truly brings the production to life. Though the set appears simple, the explicit attention to detail including the beautiful hard wood floor and even utilizing the theatre’s poles as part of the set is a treat.

Audiences will enjoy the spirited entertainment this show encompasses leaving you full of hope, love, trust in yourself and your tribe. It is a wickedly fun production full or laugher, warmth and heart. This is simply theatre at its best: you will feel a part of the show and leave richer for the experience. It is truly joyful featuring genuine characters with heart, familial traditions and religious rituals that deliver the true spirit of the Holiday season.

Don’t miss checking out the show by ordering your tickets here.