Williamston Theatre Out of Orbit 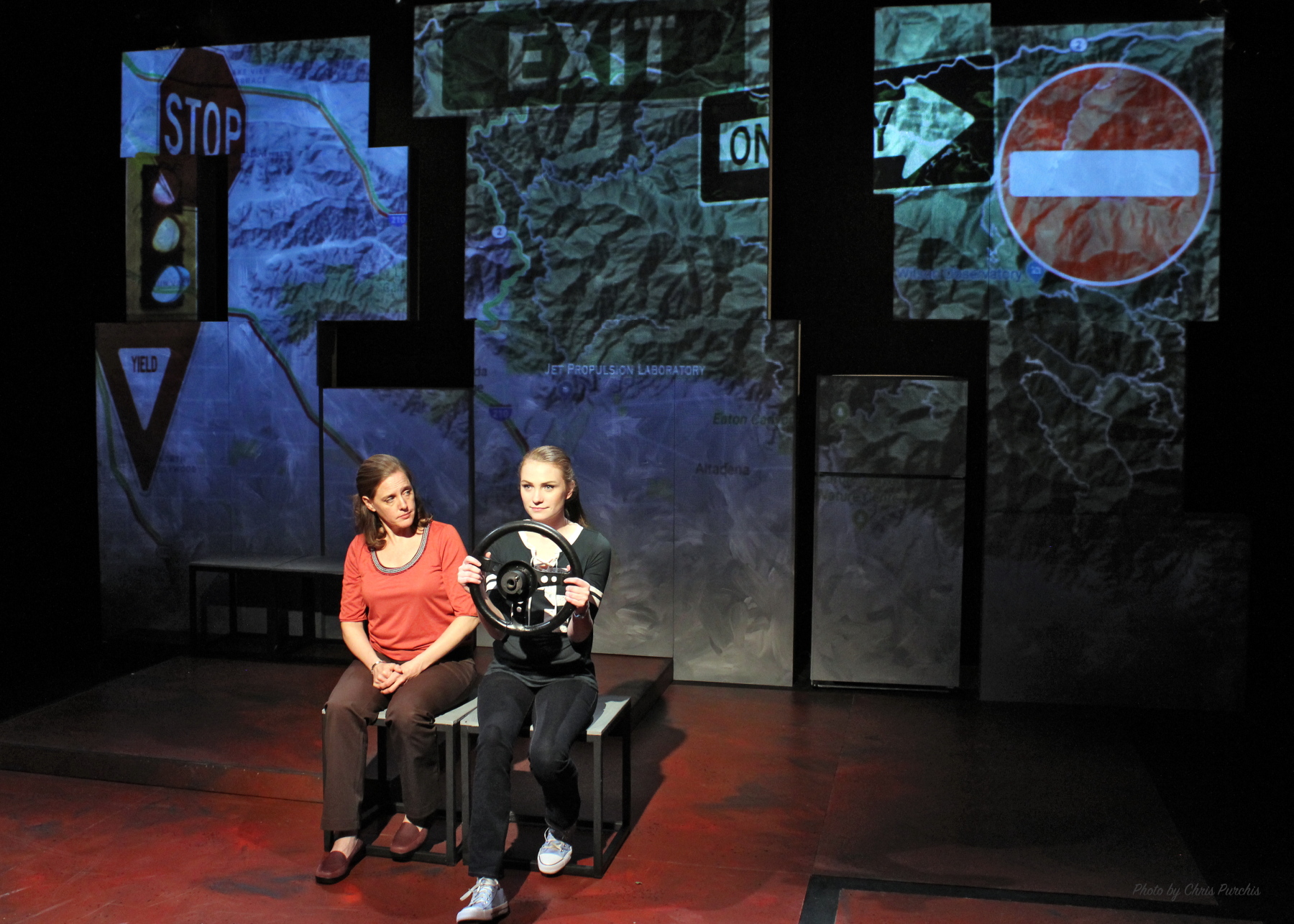 Williamston Theatre’s production of Out of Orbit follows the lives of mother and daughter, one specializing in rover projects for Mars and the other finding her way through the life of a teenager. The production brings to life the tumultuous relationship between a mother and her teenage daughter in a touching tribute filled with tension, angst and most importantly love.

The Story: Meet the Jet Propulsion Lab Scientist mom and her underachiever teenage daughter.  Sara lives on Mars time, spearheading the Mars Rover Expedition, visiting a planet she cannot touch.  Her daughter, Lis, on earth time, falls under the spell of an internet romance.  Sometimes it takes being worlds apart for an exploring woman and a longing-to-be-explored girl to find each other in our increasingly disconnected universe.  A tender dramedy about the challenges of a unique mother-daughter relationship.

Jennifer Maisel script tackles the conflict between parent and child and the difficulty of accepting each other as they are. The tension between mother and daughter is heartbreaking in this poignant script. This is also a scientific drama filling the stage with courage and hope via the historic journey and discoveries of the Mars Rover. The mother, Sara is driven by a love of science since she was young and is lost in a world, a planet, that is not her own. Her daughter, Lis, on the other hand, is in a different world true to the 2000s, full of teenage drama, school challenges, and social media such as online chat rooms. The exorbitant distance between Sara and Lis mimics the difference between Earth and Mars and the separation shows through setting and creative dialogue during the play. The opening and closing monologues delivered by Sara offer a symmetry to the overall performance. Ultimately, the characters are very relatable and learn to break down walls to let each other in and whether delivering moments of tenderness or conflict, they are mother and daughter through all of it. 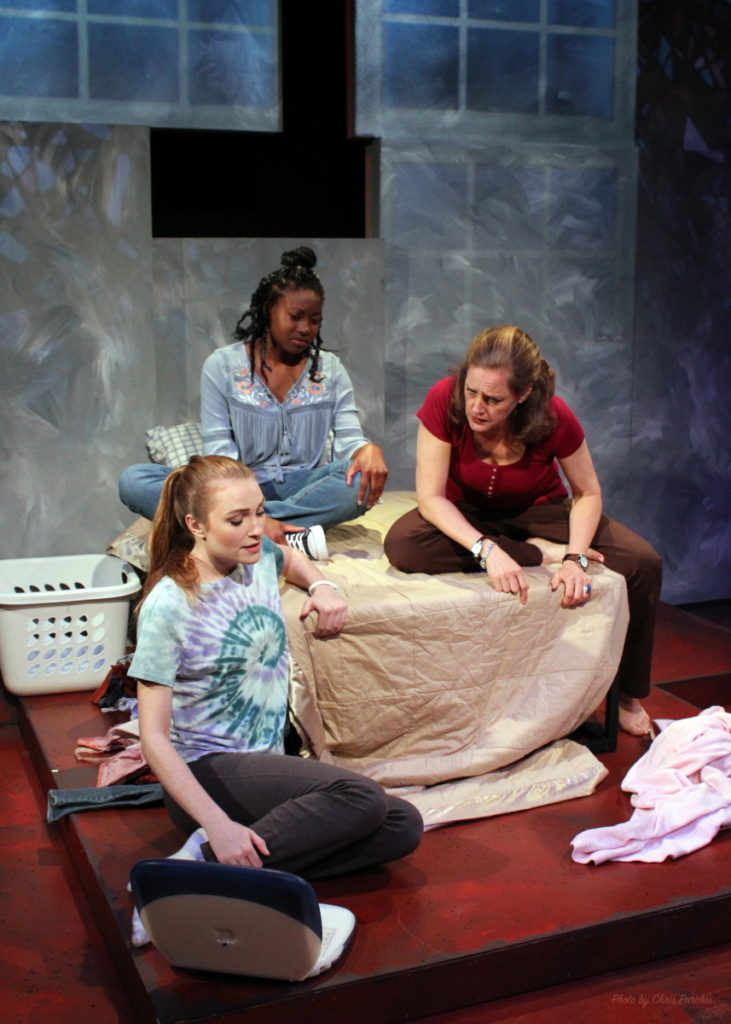 The play is directed by Frannie Shepherd-Bates and her enthusiasm about the script, cast and crew for this production is contagious. She first read the play a few years ago and liked it then. Tony Caselli (WT Artistic Director) asked Shepherd-Bates to direct a stage reading of it at Williamston Theatre and she was hooked. Shepherd-Bates summarizes, “I realized I don’t just like this play, I love this play. It speaks to me on so many deep levels. Working on it with these guys—I just fell more in love with it. I see so much in the play of myself and the people I know. It has been a really emotionally, psychically, spiritually and artistically satisfying experience.”

Williamston Theatre is working in collaboration with Michigan State University for this World Premiere production. The five-member cast of Out of Orbit consists of three newcomers to the Williamston Theatre stage, MSU Students Christine Elliot, Ejiro Enajero and Lukas Jacob. The final two cast members are familiar faces on the Williamston stage, Michael Lopetrone (Beau Jest, Taking Shakespeare) and Emily Sutton-Smith (Doublewide, Summer Retreat as well as being the Development Director of WT).

Shepherd Bates shares how the casting process was challenging this time around. Several rounds of auditions at Williamston Theatre and later MSU took place to find all the actors. Early on in the process, Sara’s role had to be recast and Sutton-Smith took the part. A surprise also came during the rehearsal process when an actor had to drop out due to personal reasons. Lopetrone was quickly recast just twenty-four hours after receiving the script and nine days into rehearsal. Things finally fell into place. 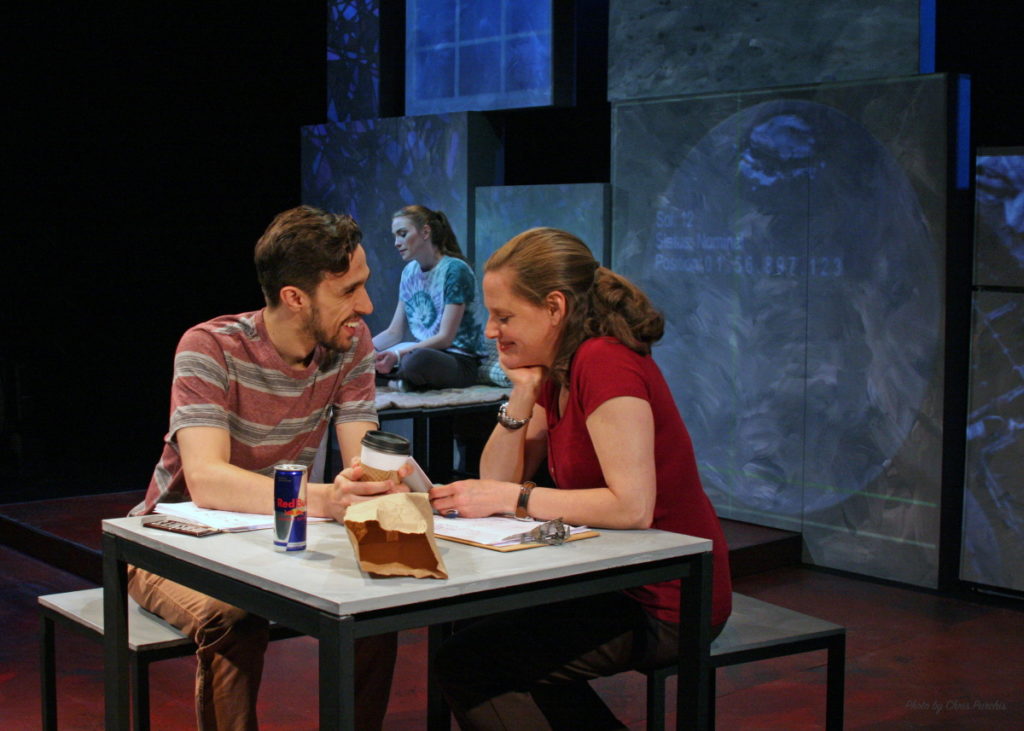 The director and cast are animated about the story and their first reactions to the script. The script offers engaging characters that draw you in. Enajero shares, “I love how relatable the characters are. No matter who comes to see it, they can see versions or part of themselves in this play.”  This is a story about women and their ultimately complicated relationships. Sutton Smith summarizes, “I always like strong female characters. And my character is a single Mom and a scientist. And that brings up a lot of interesting stuff with regards to the role of woman in our society. The role of mothers, working mothers, women in science, all of that. Being pulled in many different directions. It shows the complexity of all of that.” Elliot adds, “For me, the first time I read it I found Sara to be more interesting off the bat compared to Lis. That set a standard for me to climb to. Pulling all these interesting facts from what her Mom says and adding it to my own story was huge to me in approaching it. I think it is important to have those opportunities to tell a story about two people trying to connect with each other who are so similar and so different at the same time.”

The story has a strong scientific theme and brings to light historical events amongst the dynamic relationships. Jacob shares, “When I first read the play—the first thing I got from it was film themes. And I think that is because a lot of the relationships are really realistic but also very intimate. I think having multiple setting changes too on stage as a lot of potential for film. I think it is really interesting and perfect for the space here.” Lopetrone concludes, “It is really cool stuff to dig into, the rich history of this being based on true events. A plethora of research to dig into like the vocabulary of Nasa. And the relationship between Sara & Lis and the work life balance that a lot of people go through.”

When discussing the production and the characters, the camaraderie and enthusiasm is contagious with this team. Jacob shares how he can relate to his own character having spent time on the road playing his guitar at open mic events. Enajero finds challenge in the fact that her character is different that she is and states, “I love how comedic my character is. I’ve played dramatic roles for a while now so to take a break from that is very interesting. It is nice to play something so different from myself.” Elliot adds, “The growth that I have to experience over the course of two hours being a teenager is intense and challenging but every time I feel like I am doing some sort of justice to my character.” 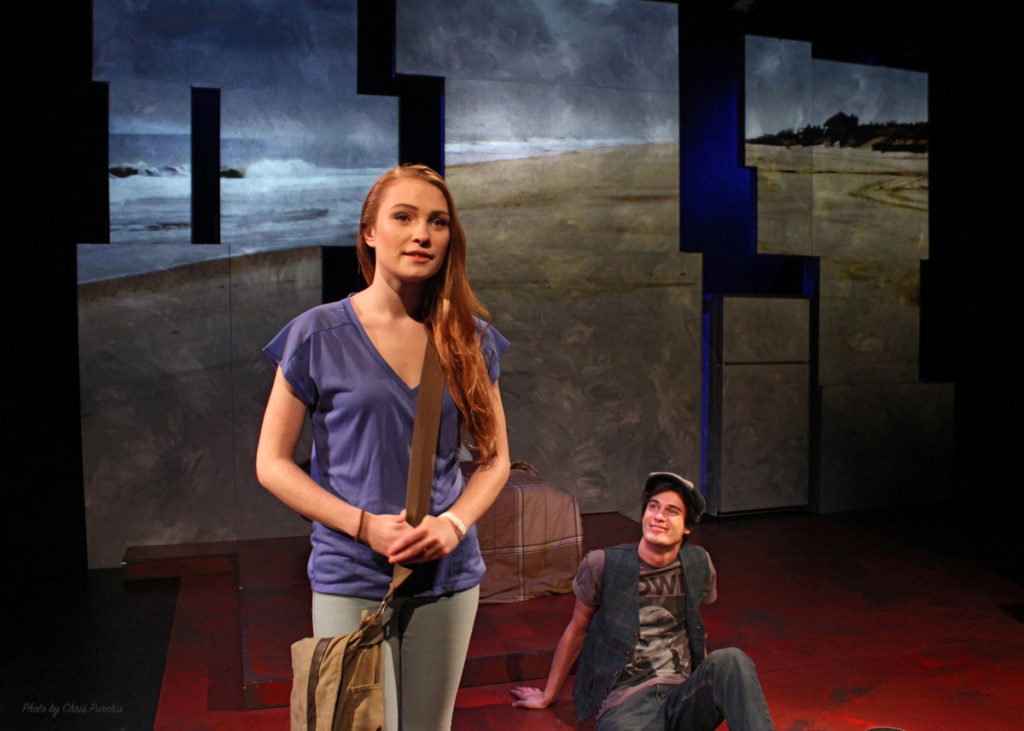 Williamston Theatre showcases a monotone backdrop that allows for projections to be a highlight of the set. Some of the images are actually NASA footage which makes it even more interesting. If you look closely there are cool prop details like a fridge within the backdrop too. Sutton-Smith shares, “I like the projections a lot. It’s cool, it’s new, it’s different speaking as someone who is on the staff. It is a great way to expand our ability to tell stories in this space.” Lopetrone agrees that the projections are truly one of his favorite things about this production. The design delivers the theatrical feel for this production showcasing technology and still delivering human relationships at its core. There are several location changes with this production and Jacob shares how the neutral stage décor also allows the audience to be transported to the different settings easily.

Audiences watching Out of Orbit will easily relate to the story, the characters and how they feel. The importance of family despite the challenges and love-hate relationship it may entail is prominent. The story brings historical events to light that you may not be aware of and reminds you of the adventure nature our space program and Mars Rover missions entail. Shepherd-Bates summarizes it best, “The experience overall has been really rewarding. Like I said, I see a lot of myself and the people I know in this play. I see a lot of the big picture stuff–the challenges that mothers and daughters and parents and children face. And people who are working in industries where they are outliers. And being able to take so much of what is meaningful to me and tell a story with it in a meaningful way has been really gratifying.” This production will touch your heart, remind you how important family ties are and likely to make you call your mother, daughter or someone important to you. Don’t miss checking out the show by ordering your tickets here.