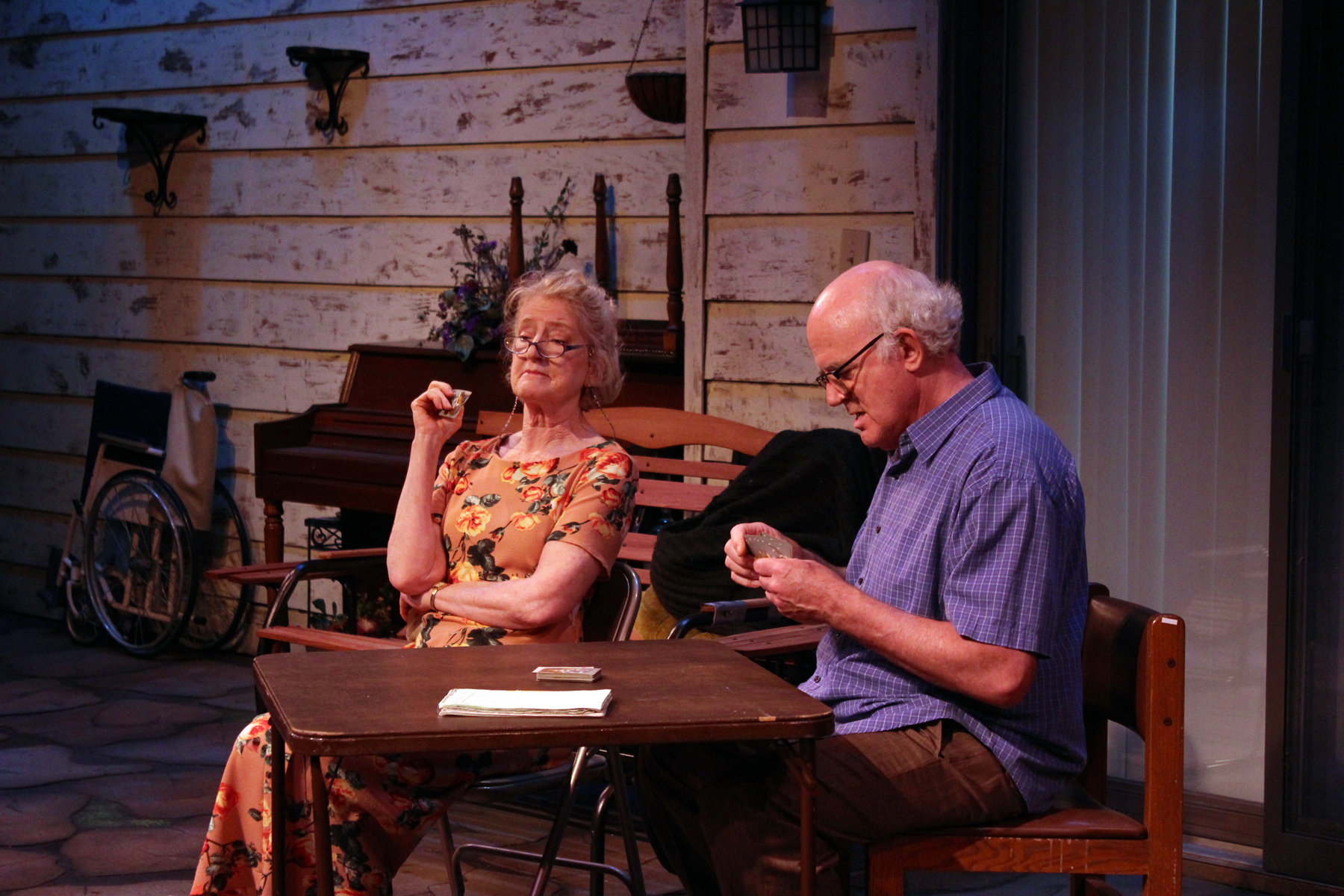 Williamston Theatre’s Opening Night production of The Gin Game is an eloquent, bittersweet and touching comedy full of intensity that leaves you riveted in your seat. This classic play from D.L Coburn was the winner of the 1978 Pulitzer Prize for Drama and originally starred Jessica Tandy and Hume Cronyn. It is easy to understand the critical acclaim this play has received for it is thoroughly entertaining featuring a battleground atmosphere between the characters delivered with superb theatrical finesse.

The Story: Weller Martin is playing solitaire on the porch of a seedy nursing home.  Enter Fonsia Dorsey, a prim, self-righteous woman.  They discover they both dislike the home and enjoy the game of gin, so they being to play.  As they play, intimate details reveal themselves, and what follows was called by The New York Times “The closest thing the theatre offers to a duel at 10 paces”.  Contains adult language.

Appearing together for the first time on the Williamston Theatre stage in The Gin Game are husband and wife, Hugh Maguire (Leaving Iowa) and Ruth Crawford (A Painted Window, Jacob Marley’s Christmas Carol).  Williamston Theatre’s Executive Director, John Lepard (The Nerd, The Gravedigger: A Frankenstein Story), is the Director for The Gin Game.  Paige Conway is the Assistant Director.  The production team includes Scenic Design by Gabriella Csapo, Lighting Design by Shannon Schweitzer (Our Lady of Poison, Beau Jest), Costume Design by Holly Iler (To Quiet The Quiet, Out of Orbit), Sound Design by Julia Garlotte (Memoir, Our Lady of Poison) and Props Design by Michelle Raymond (To Quiet The Quiet, A Hunting Shack Christmas).  The Stage Manager is Stefanie Din (To Quiet The Quiet, A Hunting Shack Christmas).

Williamston Theatre’s very own Executive Director, John Lepard is thrilled with this production and enjoys working with cast and crew. He knows the script well since it has been around for ages. Lepard shares how each scene features its own arc and presents a journey for the audience. Lepard’s love for this script is apparent when discussing the play. The excitement is easily contagious making one eager to see the show. The entire cast is enthusiastic and happy to bring this story to life. Crawford had the honor to see the original production on Broadway and they have all enjoyed performances of the show on stage in the past. Maguire shares his reaction to the script and summarizes it perfectly, “The script is such a rollercoaster; there is so much possibility for happiness. Sometimes hysterically funny and sometimes frightening. The playwright is brilliant.”

When discussing the production and the characters, you instantly feel part of the journey that this team delivers. Crawford states, “Love that we are doing it here. There is comfortable cooperation knowing the Director and Stage Manager. You feel you have a voice and feel comfortable expressing it.” Maguire talks of how there is a sense of humor and the theatre is a safe fun place to work together. He shares how his character has a sense of positiveness despite his fear of what his life has become. Crawford adds how she is able to draw from herself for this performance and how these characters remind her of people and experiences in her family. Crawford and Maguire are also enjoying performing leading roles on the same stage. As husband and wife, you can see how supportive they are and how much fun they are having with the casting experience. As the saying goes, ‘Don’t sweat the small stuff’ and these two actors embrace this motto. 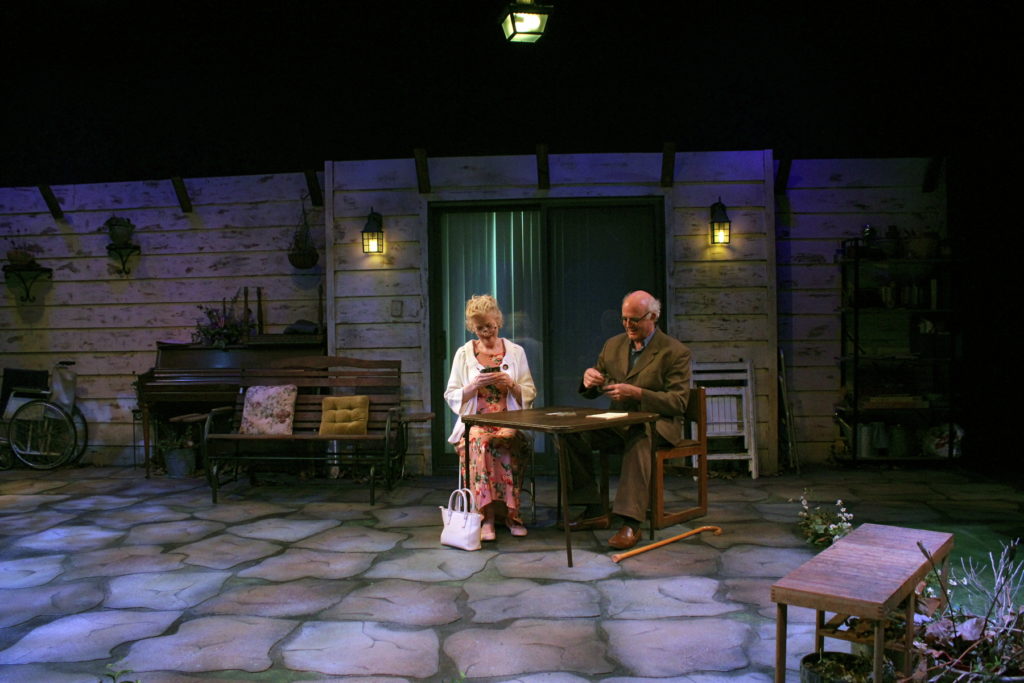 Lepard shares that casting was a simple process for this show; he wanted Crawford and Maguire for the roles and they accepted his invitation to perform the show. Lepard concludes, “Rehearsals have been fantastic. Only tweaking tiny moments. I knew they would be great to work with. Both bring life to their characters. Just being able to give tiny directions with nothing to overhaul. They know them so well and bring their own personalities to the characters.”

Williamston Theatre’s stage illustrates an outdoor porch of a nursing home for senior citizens. The set features many small unique touches that bring the time period and stage to life. The surprise roof feature is a fun surprise. The characters and scenery are very relatable and transport you to nursing home where you embrace the older generation. This story and set will appeal however, to all generations in the audience.

Opening night, the theatre crackled with an intense atmosphere full of touching heartbreak and raw emotion full of humanity. Although the two characters just met, they showcase a deep complicated relationship similar to an old married couple whose years together have illustrated the art of barbs to create wounds by using each other weaknesses against one another. You are on the edge of your seat, captivated, with each hand of Gin. The performance of The Gin Game takes the audience on a journey that is painfully relatable and like life still humorous. The journey experienced brings forth understanding of the older generation that should be respected. The show offers a talented playwright, director and cast with a mix of harsh and tender moments that simply capture your heart. Don’t miss checking out the show by ordering your tickets here.